ASM826 is hosting a web shooting contest with an assist from Borepatch. It's 22's at 25 yards, offhand, 5 rounds on each bull. Since the slab is done and we're still in recovery mode it was time for a little practice. We loaded up the rifles, a couple of handguns (just for fun) and headed out on a hot Spring day.

This is the target at 25 yards. I scoped the range with my Bushnell laser rangefinder. 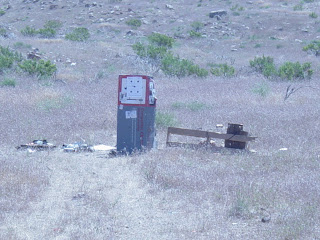 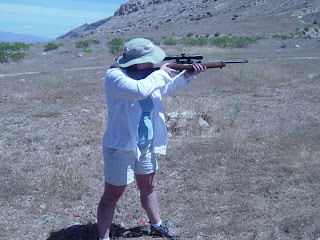 And His. Both are stone stock with cheapie 4 power fixed scopes. 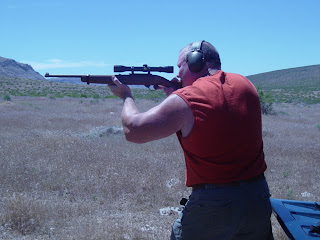 This is my best 5 shot group. Lu decided she needs a bit more practice so won't post a target until later. It's not bad but clearly I am in need of more trigger time. Oh noes!!! I saw someone in with an 11. I don't think I'm going to get anywhere near that score. 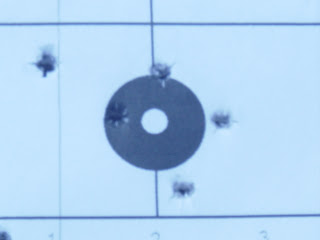 After all that hard work a little fun was required. Lu hasn't shot her Ruger Vaquero in 44-40 yet. What did she think of it? It was love at first shot. She proceeded to fire a box of 50, pausing only to giggle and reload. There's a story behind this gun. I saw it at a local shop many years ago. I loved it as soon as I clapped eyes on it but was hesitant. Lu convinced me to buy it (Love that woman). When I wanted the Blackhawk last year I again hesitated. I mean I already had the Vaquero. So Lu stepped up and out of the goodness of her heart took the Vaquero off my hands. Fate or scheming? Only Lu knows and she's not telling. 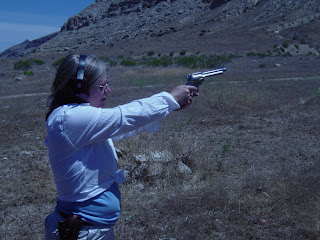 I brought the Blackhawk .45 LC along. She liked it but not as much as her Vaquero. 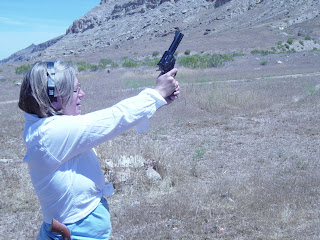 All in all a very good time. As I told Lu, it's important she knows how every gun in the arsenal works. How to load, unload and handle each as well as the confidence she can put lead into any target she takes a takes it into her mind to ventilate. That's fair warning to anyone foolish enough to try her on for size. To that end we try and take out either new guns or seldom handled ones along with the training guns for the day every time we shoot.

We'll do a little more practice and then shoot it for score sometime next week. Hey, this is fun!

You should join us Blue, although some of those competing are absolute sharks. I am so going to get my head handed to me but at least Lu and I will have a good time doing it. Hey, I need someone to help me uphold the Light Fighter honor!