Lu's off to a job interview (A part time gig at the pool so she can teach the littleuns fish skills and spend enough time away to avoid that urge to throttle me). It's a crappy day, been raining and windy, so I can't do any of the five thousand things outside that I need to accomplish. Chrisi is sound asleep. The gym isn't calling my name. My mind is a giant suckhole of blank.

In that light I give you this. From left to right; 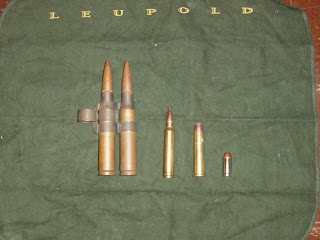 I don't know who was the first to make a dedicated .50 BMG rifle was but surely Ronnie Barrett deserves some kudos for perfecting the breed. The M82 was a game changer. For the first time a solo Infantryman could tote along a reasonably light weapon that could both punch through armor and deliver a lethal blow to enemy combatants at distances once considered suitable only for Artillery.

Carlos Hathcock talked about 50 cal. sniping in Vietnam by mounting a scope on a Ma Deuce. In fact, he held the record for longest confirmed kill with just such a set up at 2500 yards, a record he held until 2002. (If you haven't read it, Whitefeather is a fine book.) Now, as someone who has a bit of experience with the M2 I can say that I wouldn't want to haul one around just for the chance at making a record shot. Enter the man portable .50 caliber rifle. In the hands of one trained and expert in it's use it's lethal with a capital L.

There are other rounds out there that have taken some of the sniper shine from it, such as the .338 Lapua, but for my money there's nothing like the Big Fifty. A friend to the Infantryman and a terror to his enemies.

I've never shot a .50 but it is something I hope to do before I croak. It'd be even cooler to OWN one, but I guess I hafta walk before I can run!

What we need to do Inno is drop theredneckengineer a snivel and see if he'll let us shoot his when he gets it done.

Any ol' time you're up for it. Shoot, I'll even buy the ammo.
I'm supposed to have it done soon(I know, I keep saying that), but it WILL be at the Gun Blogger Rendezvous in September, in Reno, Nevada.
If I could quit making changes on the design and just be happy with it, I'd be done already.

FWIW, there is nothing like shooting a .50, although it is more of a WHAM and BOOM than a kick and a bang, at least in my experience.

By the way, Six, I just tossed something up on my site for you. Should be worth a laugh.

Thanks brother. The only thing better than shooting just any old .50 would be shooting one you built yourself. I'm still in awe.

Six,
Thanks as always for the kind words. Hopefully I'll be staring at a finished product soon now that I'm done with classes.