The delivery truck was a few minutes late which was good because so was Lu's nephew, our third worker. I failed to get any good action pictures as the concrete was being poured because I was just a little busy and kinda forgot. We worked our butts off and are pretty much Zombies at the moment. We even had Cannibal Pizza for dinner. Well, really it was a Domino's Meatsa but we made the Zombie sounds while we ate it and pretended it was braaaiiiinnnnssss.

This is just after the pour was completed. It's been screeded and I've already done the first and second float and started on the edging. The concrete was Six Sack so it was a bit hard to work. I should have asked for it to be a bit wetter. By this time it was getting hard and I had to keep the floats wet from a bucket to even get it to work at all. Live and learn. 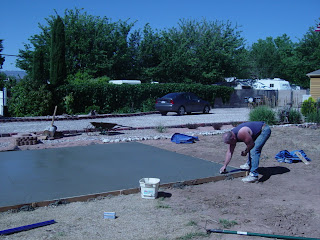 Finishing the edging. Still one more floating to go and then the final broom finish. I chose broom because I want a very rough texture. Among other things I'll be doing vehicle maintenance and repair on this slab and I'm both clumsy and a slob. Oil and slick finished concrete are an invitation to disaster for crash boy. 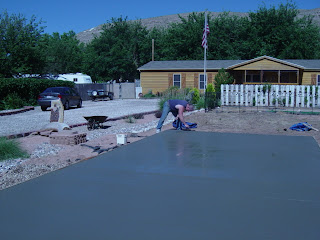 And here is the finished product. That's just a bit over 5 and a half yards of concrete. It'll fully cure in about a week but as of this post, about 7 hours after the pour, you can already walk on it. That's partially a result of the climate and weather and partially because I chose a very hard mixture. It's hard to work but with the steel reinforcement it shouldn't crack. For the next few days I'll water it and keep it covered with plastic to allow the chemical bonding to occur without drying out the concrete. That results in a proper cure and good concrete that'll be strong and last a long time. 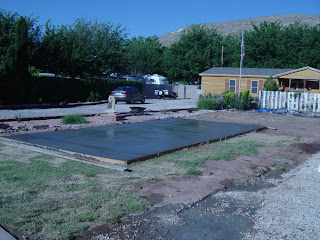 A word on screeding. Screeding is where you draw a straight edge back and forth across the concrete to spread it evenly across the pour. This is a 14 foot wide slab. When I made the pour plan I had a 16 foot 2x4 as the screed. Car Guy verbally smacked me upside the head me and informed me that a 2x4 that length would bow too much and never work. Since he is the Car Guy, and therefore presumed to know all there is to know about concrete, I heeded his advice. A 2x8 would have been too heavy and unwieldy so I went with a 16 foot 2x6. He was right. It was the perfect choice. Glad I thought of it. Oh allright. Thanks Car Guy. You were right. And thanks to Lu's nephew.

In the next few weeks I'll be ordering my new building. Can't wait. And yeah, I'm taking tomorrow off. It's hell getting old.

I wonder if there's any of that brain pizza left.

So did the Vampire show by himself, or did Mom pull a Steve and go get him? Glad he came through, either way! Still wish I could have been there to help. And let the kids leave hand prints:)-

He showed all on his own. Late but he did make it. Actually, he worked his tail off, stayed for dinner and cleaned up afterward. I was most impressed.

I cut and laid forms, mixed and poured plenty of concrete and it wasn't long before I learned how to screed concrete as well. Growing up in the country where we built our house sure helped.

Lord knows that is back breaking work. My hat goes off to you, Six, that concrete's looking pretty good and flat.

Thanks Redneck. That's where I got most of my experience as well, helping my farmer, homesteader, do-everything grandfather on his various projects. Hey, a country boy should be able to do just about anything.

Now that it's too late- did you put anything in the pad to anchor your new building?

It's an excellent question Kurt. I'm going with an aftermarket anchor kit. My problem was there is some variation in the sill plates for the building. Enough that anchor placement and length was going to be critical and I didn't dare emplace the anchors beforehand. When I get the building I'll emplace the sill, square it and drill/hammer through it and the concrete and set the anchors with epoxy. It's a lot harder but it'll allow me to place them exactly where I need them. I'll double up on anchors so it should be as strong as if I had set them into the concrete.

Man, I'm getting tired just reading and looking at the pics. My dad and I did my driveway a few years back. A touch over 90' long and about 14' wide. My back still hurts when I think about it :)

Thanks Blue. 90x14? Yeah, that's definitely an ouch moment. Still, the feeling from accomplishing something with your own two hands cannot be beat.